Posted by Duffy and Swenson

An MST case study looks closely at principles 3 and 9

Kids are pulled every which way, even those from stable, supportive families. They don’t know who they are, what they want to be, how they should act. If you throw into that mix parents who are struggling to parent, friends who are negative influences, schools not able or too overwhelmed to cope with “problem” students, you have a child who might need help getting out or staying out of the juvenile-justice system.

Sixteen-year-old James is a case in point. Here was a kid on probation for numerous arrests ranging from theft, substance abuse and being aggressive. He came home whenever he chose. What’s more, the boy hung out with other teens who got in trouble with the law. 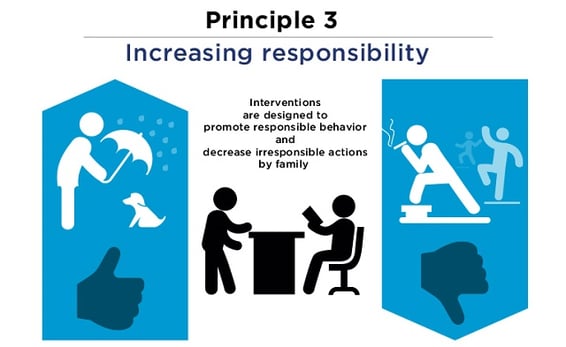 There is one school of thought that a kid just needs be told to straighten up or face the consequences. Let the adolescent know that bad actions lead to bad results. That’s how you get him or her to be responsible. As nice as this sounds, it’s quite simplistic. It overlooks that learning responsibility is a developmental issue with milestones at each stage along the way to adulthood.

Kids need opportunities to develop decision-making skills. Younger kids should receive strong parental guidance. As they get older, more independent decision-making would come with the demonstration of increased responsibility. No two kids develop at the same rate, and no two parents come with the same knowledge and skills to manage these tasks.

Should a youth be placed out of the home?

The question for our society is at what point should the community step in and take over for the parent. That is, uproot a child from the home. Unfortunately, this happens far too often when it comes to kids who have committed non-violent acts that are often acceptable for adults, such as staying out late, skipping school or consuming alcohol.

Multisystemic Therapy’s (MST) take on improving the situation is to give parents the skills and support needed to manage their youth’s risky behaviors in and out of the home. Then they can effectively guide and handle their children long after treatment ends. Two of MST’s Nine Principles address just that. Principle 3 calls for designing interventions that promote responsible behavior and decrease irresponsible actions by family members. Principle 9 deals with investing caregivers with the ability to address the family’s needs after the intervention is over. The caregiver is viewed as the key to long-term success. Family members drive the change process in collaboration with the MST therapist.

MST looks at a young person’s total environment. Adolescents are influenced by others they meet, sometimes without the parent’s knowledge. Caregivers might realize the child is hanging around with law-breaking friends, but are at a loss about what to do. By helping the parents identify and deal with each influence, they can then be more responsible parents and teach the young person self-management skills along the way. When a child is removed from the home, the parent’s ability to learn and develop is also removed. This makes transitions back from youth residential care so very difficult. 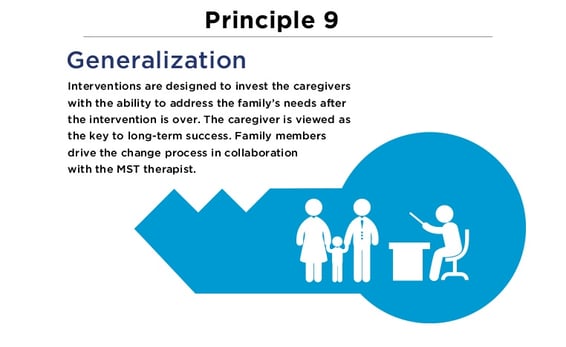 And then there was James

As it turned out, James and his mother, Marsha, were able to benefit greatly from the MST principles. By the time the boy was referred to MST, he had gotten into enough trouble that he was given a curfew and enrolled in a program that included heavy surveillance of his movements. The therapist knew these were not long-term solutions. To get James on the right track, Marsha would have to better supervise her son’s choice of friends and take fast, direct and firm action in response to James violating rules. This was how the teenager would learn to act more appropriately.
But there was a problem. Marsha felt that because the probation office and surveillance program were keeping tabs on her son and reporting his progress and location, there was no need for her to supervise and monitor him.

The therapist consulted with the probation officer. They agreed that for long-lasting success, it was crucial to develop Marsha’s ability to enforce limits on her son. So, they developed a plan. The probation office and other program would continue tracking James’ whereabouts, but they would no longer report to Marsha as frequently. This would diminish her perception that everything was being done without her.

The mother sees she must do more

The therapist was then able to get Marsha to realize that the needed supervision was ultimately her responsibility. They worked together on a strategy whereby, with the help of her supports in the community, Marsha could monitor where James was going and with whom he was associating. She enforced repercussions if he ventured to forbidden places and increased freedoms if he behaved appropriately.

Eventually, James filled his time with prosocial activities and was rewarded for doing so. As Marsha continued to monitor and enforce limits, his offending stopped. Ultimately, James learned that what he did, good or bad, brought about consequences. The boy’s improvement began when his mother took an active role in addressing his behavior. The therapist facilitated this change by forming a collaborative relationship with the probation department that met its requirements while supporting the clinical goals. They created an environment where conduct was changed through an increase in responsibility, first in Marsha’s role, which then drove an increase in responsibility by James, pushing him to be more trustworthy and mature.

We should assume that all parents want their kids to do well. If we see anything different, we should assume that there is a failure to overcome barriers rather than caregivers not being committed to effective parenting. The MST approach provides many more opportunities to help parents develop the skills and supports needed for their children to succeed.

If you are interested in learning more about how and why MST works, consider attending the MST pre-conference at Blueprints on April 11. Read more about the conference here.