With Hispanics and Latinos making up more than 48 percent of Los Angeles’ population, it is no surprise that those concerned with the local juvenile-justice system would turn to the Rand Corporation to evaluate how effective Multisystemic Therapy is with minority youth offenders.

Rand’s study followed 757 juveniles who received Multisystemic Therapy and 380 offenders who did not participate in the program from 2003 to 2010 to compare the outcomes of both groups. Of the MST group, 77 percent were Hispanic as compared to 69 percent in the non-MST group.

The results show MST-treated youth having a lower recidivism rate and doing better in their dealings with the county's probation system. (See below.) MST youth had significantly lower incarceration rates than the other group (11.2 percent, compared with 20.3 percent) and significantly higher rates of completion of community service (8.5 percent versus 2.6 percent). 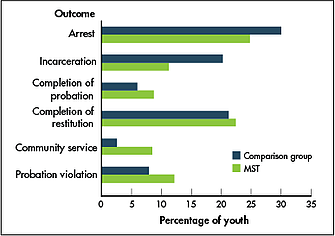 The researchers also measured five areas to see if offenders and their families who participated in an MST program experienced an improvement in functioning in these areas —parenting skills, family relations, network of social supports, educational and vocational success, and involvement with “prosocial—i.e., beneficial or helpful—peers.” It was found that only 21.2 percent of juveniles had “satisfactory” family relations when they started MST. That jumped to 77.8 percent when they had completed the program. Parenting skills went from a 4.3-percent satisfactory rating to 72.7 percent.

Curiously, the results for black youths were not as good. The report said, “Black MST participants did not show more positive outcomes than black comparison-group youth.” One possible explanation was suggested by two of the Rand researchers, H. Dawn Weinberg and Terry Fain.

Weinberg said, “matching and engagement may be the variable contributing to this outcome. The hypothesis could be that the Hispanic families may be being served by bilingual therapists in the families’ first language, which may have enhanced engagement with them.”

Regardless, the study concluded that “our results indicate for the first time that MST is an effective treatment for Hispanic youth, an ever-increasing proportion of the U.S. population, and one that is disproportionally involved in the juvenile justice system.”

To learn more about what makes MST such an effective program, download this white paper.