Approximately 500 families have completed Multisystemic Therapy (MST) in Iceland since the first team started in November 2008. MST was brought in as a part of a policy change by the Government Agency for Child Protection, which is a provider for speciailised services like Parent Management Training–Oregon Model (PMTO), MST and Trauma Focused Cognitive Behavioral Therapy (TF-CBT) for sexually abused children (Barnahus—Children‘s House). Since 2010, two MST standard teams have worked in Iceland. MST, like all other social services in the country, is free of charge.

MST brought a significant improvement to the Icelandic Child Protection System (CPS) and made it possible to close many of the residential treatment homes. 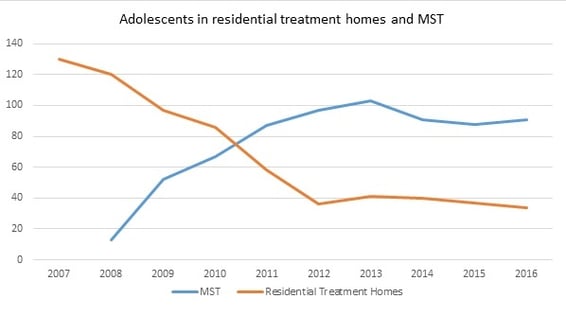 MST is a part of a stepped-care system. Around 80 percent of all children who start MST finish the treatment, and 27 percent of those who finish are placed in residential treatment homes or foster care within the next 18 months.

The CPS is well organized with mandatory reporting. There is no juvenile justice system, no youth prisons and no closed CPS facilities. There is one CPS emergency unit for adolescents with a maximum placement of 14 days. Since the UN Convention on the Rights of the Child was legalized in Iceland in 2013, it is forbidden to place children (up to 18 years old) in jail with adults. If a child is sentenced to jail, he or she is placed in therapeutic residential care. But in most cases, MST is available if it is seen as an appropriate measure. Judges in Iceland are very reluctant to sentence children under 18 years old to jail. The last sentence was in 2013 for a period of two months.

MST teams are placed in Reykjavík, the capital, and for the first seven years, they served an area within a one-hour driving distance from Reykjavík, reaching around 85 percent (290,000) of the population. Other areas of the country are too sparsely populated for a whole MST team. The Government Agency, parents and stakeholders voiced unhappiness with this situation since children from other parts of the country still had to be referred to a therapeutic-assessment and treatment centre in Reykjavík, sometimes with placement in therapeutic residential homes. According to the principle of equality, which can be found in Icelandic laws, the constitution and the UN Convention on the Rights of the Child, it is illegal to discriminate against children on the basis of where they live. Therefore, the Icelandic MST services have an obligation to provide the same services throughout the country.

In 2014, the Icelandic minister of social affairs made a request to establish MST teams in remote areas. Our calculations estimated that we could serve around 8 to 10 MST cases a year in remote areas (around 10 percent of the whole caseload). Most of these cases would be from the same area in the northern part of the country. In close collaboration with MST Services, we designed an exception to the model and in 2015, started to use domestic flights to reach other parts of the country.

The domestic airport is situated in Reykjavík with flying times of 30 to 40 minutes. Flights are available three to four times a day, and there are rarely long delays or waiting time for domestic flights. Therapists have been able to maintain flexible meeting times with the families and travel out even on days when a session hadn’t been planned. As regular customers, the therapists can revise or cancel flights on short notice, without paying a fee, if there are sudden changes in a family’s schedule. 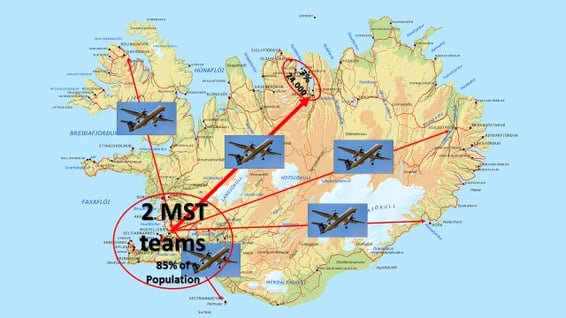 Regarding the 24/7 coverage, the CPS has 24/7 backup and is in all cases the referrer to MST. CPS and police cooperate with the MST teams and are always involved in safety plans. That means that outside the regular meetings with families, the therapist can support and solve problems with phone calls. There have been no reports of clinical barriers presented by the transportation plan.

Therapists' caseloads are reduced to three cases when airline travel is required. So far, therapists have not shown additional stress. Outcomes are good, and families and stakeholders are very thankful for the service.

Halldór Hauksson is the Program Director for MST Iceland

To learn more about what makes Multisystemic Therapy effective, download this white paper.