The ‘status quo’ can be a barrier to progress.  Moving out of the comfort zone can promote innovation and generate outcomes. This is especially true when it comes to juvenile justice.

Ohio recognized this when it came to reforming its juvenile-justice system. In 1993, it created RECLAIM Ohio (Reasoned and Equitable Community and Local Alternatives to the Incarceration of Minors) in an attempt to get courts to use community-based programs “to meet the needs of each juvenile offender or youth at risk of offending.” By providing funding incentives, in the first pilot year alone, it had a 42.7% drop in commitments. 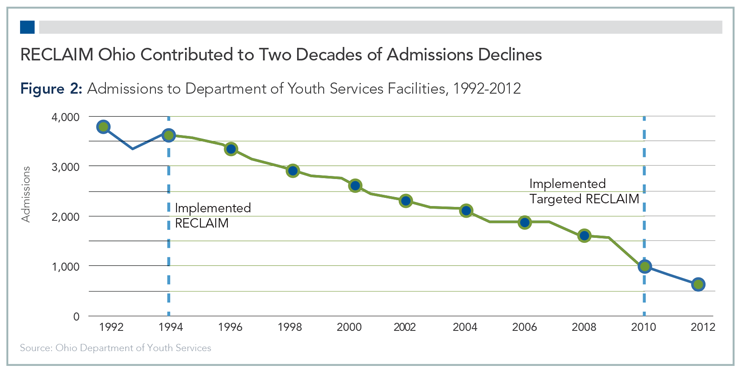 Despite its successes, the state didn't stop there. It added two important initiatives to the RECLAIM model to divert youth at the local level—the Behavioral Health/Juvenile Justice (BHJJ) and Targeted Reclaim (TR) projects. Under these funding opportunities, a number of Ohio communities selected Multisystemic Therapy (MST) as one of their evidence based interventions.

The BHJJ project is a collaboration between Ohio Department of Youth Services (ODYS) and the Ohio Department of Mental Health and Addiction Services (OMHAS). To receive funding, local courts and mental-health/substance abuse authorities had to propose a process that would identify, refer and serve youths through evidence-based and promising practice home- and community-based services. A detailed and ongoing evaluation of this project is conducted by the Begun Center for Violence Prevention Research and Education at Case Western Reserve University. The clinical and fiscal results are notable including:

The TR project identified the Ohio counties referring the highest numbers of youth to DYS. The six largest were offered additional funding in exchange for a designated percent of reduced commitments by the local juvenile court. TR required that the courts only choose evidence-based/promising practices as part of the diversion efforts. These six counties brought their percentage of DYS overall admissions from 63 percent to 50 percent.  The TR program is now in 15 counties, and its grant funding jumped from $2.8 million to $6.3 million. Furthermore, the University of Cincinnati found that young people who went through TR were 2.4 times less likely to be subsequently locked up than those who put into a state facility.

In addition to these initiatives, Ohio participated in the MacArthur Foundation’s National Campaign for Reform, which focused on improving the juvenile-justice system to lessen youth incarceration. With advocates, lobbyists, researchers, content experts and local foundations collaborating, significant changes to Ohio’s juvenile-justice laws were made.

Key was the condition that when a state DYS facility is closed because of fewer referrals, a percentage of savings would be redirected to community-based services. To fulfill that aspect of the law, ODYS recently requested $2.2 million to be for non-residential community-based evidence based/promising practices designed to keep youth with their families and in their communities. The full story of Ohio’s reform journey can be found in a case study by the Schubert Center for Child Studies at Case Western Reserve University.

Collectively these and other efforts challenged the status quo. The results: a reduction in the rate of youth incarceration and an increase in the use of home and community evidence-based and promising practices. Reinvesting the significant fiscal savings provide more hope and better outcomes for Ohio’s youth and their families.

Patrick Kanary is the Director of the Center for Innovative Practices, Begun Center for Violence Prevention, Case Western Reserve University.

To learn more about the long term cost savings of MST download this whitepaper.