Over the course of the last twenty or so years, there has been much discussion focused on the causes of juvenile crime. Studies have been conducted, people have been surveyed, facilities have been inspected, and it has all lead to at least one solid conclusion: there is no one condition that leads an adolescent to committing a crime. Instead, researchers have found that a myriad of risk factors increase a youth’s likelihood of offending. When an individual possesses several of these risk factors, they interact to multiply the chances of them getting involved in the justice system. The risk factors identified by years of research can all fall under the umbrella of a few generalized labels: individual characteristics, family characteristics, school influences, peer influences and neighborhood environments.

Individual characteristics are typically considered demographic-type factors, including gender, race, and age. It also includes psychological factors as well, as mental health issues are a very prevalent issue among juvenile offenders. An estimated 50-75% of arrested juveniles have at least one mental health disorder; of that percentage, two-thirds have more than one mental health disorder. In the case of gender, we find that violent crimes are committed by males far more frequently than by females. A study conducted in D.C., for example, showed that 82% of violent crimes committed by juveniles in the district, including rape, aggravated assault, robbery, and homicide, were committed by males. A similar study in South Carolina found their rate of violent juvenile male offenses at 88%.In regard to age, studies by Rolf Loeber and Rebecca Stallings have shown an age-crime curve1 in which the arrest rate of teens for violent crimes peaks within a certain age range. 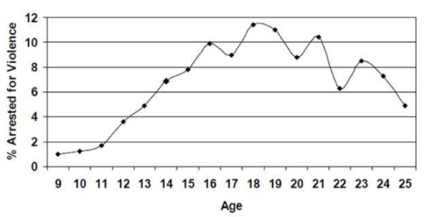 The curve peaks between the ages of about fifteen and twenty, and then declines through the early twenties. There are some variations to the curve when accounting for different factors. The violent crime curve peaks at a slightly later age than it does for property crime, and the curve for females peaks earlier than for males. Additionally, males who are from impoverished neighborhoods have a higher and wider curve, meaning they have a much wider age bracket for offending. This is especially true when the impoverished male is a minority. While arrest rates for juveniles have been falling steadily since the 1990s, minorities are still arrested for crimes more frequently than their white peers. The offense rate of white juveniles for violent crimes was 111.1 per 100,000 persons in 2012; for black juveniles, that rate was 574.5 per 100,000 persons, and the combined rate for all other minorities was 415.2.

In addition to individual characteristics, environmental factors also play a part in the likelihood of juvenile offense. One of the biggest factors is the home life of a juvenile. Youths with poor relationships with their parents, including abuse, neglect, inappropriate/ineffective punishment habits, and low supervision, have a higher chance of offending. This is also true when a youth is separated from their parents and placed in foster care. A relatively small study published in 2001 followed 250 ten-year-old males until they were 45 to find predictors of crime involvement. The study found that the biggest predictors of criminal involvement were related to poor parental relationships. A further environmental factor affecting juvenile offense is the economic standing of a juvenile’s family. Juveniles raised in low-income families have a much higher rate of arrest than those from upper or middle-class families. Furthermore, the neighborhood in which a juvenile is raised also influences their likelihood of offending. A juvenile that is raised in a neighborhood with prevalent crime, drug, or gang issues is significantly more likely to offend as a juvenile. The report, Combating Racial Disparity in the Juvenile-Justice System with MST, shares that many studies reveal contributors to disproportionate minority contact, including selective enforcement, indirect effects of socioeconomic status, differential offending and administrative practices, institutional racism and biased risk-assessment instruments.

With the increasing popularity of “Zero Tolerance Policies” in schools over the last decade or so, researchers have become interested in the ways that these policies could be influencing juvenile delinquency. These policies favor suspensions and expulsions of juveniles for school-related offenses, as well as grade retentions (holding students back to repeat a year), and even involving local authorities. FBI studies from the early 2000s showed in numbers the effect that the ZTPs were having in local schools; the number of juveniles arrested at school went from 22,300 in 2000 to more than 92,000 during the 2011-2012 school year. The rigidity of these policies meant that students were being arrested for minor offenses that could have easily been handled in schools, such as disrespecting a teacher, fighting, or truancy. Additionally, it has been found that using suspensions and expulsions as punishments are not at all effective at reducing undesirable behaviors. In fact, the exact opposite holds true, with suspensions and expulsions acting to increase delinquent behavior in juveniles. Another factor that influences the rate of juvenile offenses at schools in the presence of School Resource Officers, an actual uniformed and armed police officer that oversees a school. A study conducted by the Justice Policy Institute found that, even after controlling for economic disparities, schools that had SROs had five times as many juveniles arrested while on campus, most often for disorderly conduct. All these arrests further tax the juvenile justice system and take discipline away from school and instead put it in the hands of the justice system. Even if a juvenile receives a light sentence for being a first-time offender, any further offenses will be treated more seriously, even though their first offense should have been treated as a school-related issue.

When attempting to resolve the issue of reducing the number of troubled teens within the detention system, it is critical that we consider the circumstances that lead youth down a path of crime. It is only when we understand these circumstances and provide effective treatment to address these risk factors that we can help prevent or mitigate the effects they have upon the young and thus be able to prevent them from becoming further entangled in the juvenile justice system.