Young people in the U.K. who enter social care typically have poor outcomes. They are more likely to re-offend, be suspended from school and unemployed by the time they turn 19. Out-of-home placement is also expensive for local authorities. They are responsible for children’s social care, but investing in prevention in times of austerity is challenging.

In 2012, there were 1,600 children in care in Essex County, and the number had risen by 28 percent over the previous five years. Essex County Council wanted to commission a service with an evidence base for working with this group, but was not in a position to take on the financial risk of failure. They decided to try Multisystemic Therapy (MST) to work with adolescent children on the verge of out-of-home placement. Two teams would handle 380 young people over five years. MST itself was not new to the U.K. What was new was a form of social investment called a Social Impact Bond (SIB). 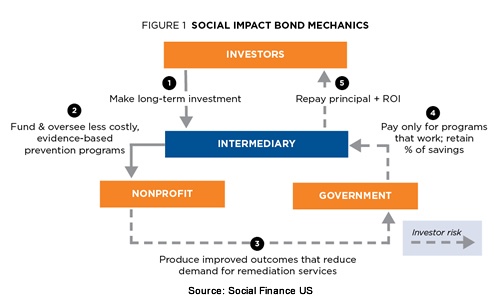 As such, they present an opportunity to provide support to reduce the strain on acute services or to introduce a more effective and evidence-based approach. The MST service is provided for Essex County Council by national charity Action for Children, and the SIB is managed by a special purpose vehicle called Children’s Support Services Limited (CSSL). CSSL includes representatives of investor groups and Social Finance, a not-for-profit organization with expertise in social investment.

The service has been in operation for two years, and so far, the results are good. One hundred and ten young people and their families received MST. More than 80 percent of these youths remain at home. Family feedback has been overwhelmingly positive about MST’s impact.

Following the success of the intervention, Social Finance (which set up and manages the Essex MST SIB) is exploring the establishment of a platform to deliver evidence-based interventions targeted at adolescents at risk of entering care to a broader set of commissioners, who are increasingly looking to pay based on outcomes. Building on the experience in Essex, this could be an exciting opportunity for the further expansion of MST in the U.K.

Social Finance pioneered SIBs in the U.K., launching the first one in September 2010 at Peterborough Prison. This funded rehabilitation service for recently released short-sentence prisoners is aimed at reducing re-offending. Reconvictions are down 8 percent, and the SIB is on track to deliver returns to investors in 2016. There are now around 45 SIBs across eight countries. In the U.S., bipartisan legislation has been introduced in the House and Senate to provide $300 million to pay for SIB outcomes and feasibility work.

For more information, go to www.socialfinance.org.uk